- April 27, 2020
In a time where the future is unknown as we're forced to social distance and stay quarantined, a new artist has been emerging from the chaos. Talissa is an upcoming artist that has dropped a hot new single called "Like I Like It" that has made an impact all over the world in the 1 month that it's been released.
Her song "Like I Like It" delivers sexy dancehall falsettos with a twist of caribbean and afro beat. She features artist Pape Euro from West Africa, Senegal who followed his music dream in the United States in 2018. He believed that coming to America he could achieve his dream and was able to work with new breakthrough artist Talissa. Talissa is a 90's baby who's songs revolve around subjects like relationships, love and life with a vision for a more peaceful and loving world.
Talissa was born in Beverly Hills and got into music after the passing of her mother, who was a ballet teacher and actress from Italy. By the time she was four she had a strong interests in the greats of Country Western, as well as the R&B anthems of artists like Etta James. She noted early on that "Singing was like breathing" for her; thus pushing her to start the nonprofit Chain Reaction Entertainment, for disenfranchised youth, who sought music as their way out, just as she had. Her latest single "Personal" is set to release on April 24th featuring Veteran Artist Kevin Mcall. Talissa is SESAC affiliated. 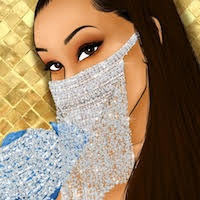