- March 26, 2020
Last week, Billboard.com debuted honky tonk hell-rasier Josh Gallagher's "Long Week Longneck." Highlighting Gallagher's "distinct brand of country music with a driving beat and his whiskey soaked vocals" (Billboard/Annie Reuter), "Long Week Longneck" serves as the first single off of his March 27 EP Turn Around Town. Written alongside Mark Addison Chandlerand John Caldwell, "Long Week Longneck" is available upon pre-order of the Turn Around Town EP now! “I’m so proud of this record. I’ve never released anything I’m not proud of, but Turn Around Town blows every other one of my projects out of the water. Everything about it is just so much more 'me' than anything I’ve done in the past," Josh revealed to Billboard, “Each song speaks a different language, and there’s no lack of variety. It blows my mind that we were able to make a record where each song is completely different, yet they’re all so true to who I am and who I want to be as a country artist … There’s ups, there’s downs and everything in between.”
@bgroundent kerrigan@burninggroundentertainment.com 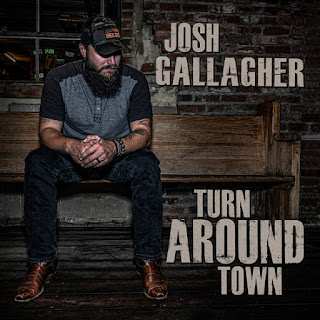 Josh Gallagher writes songs destined to root themselves inside your brain and bring you back to the first moment you heard them, every time you listen; he’s not just making music, he’s crafting memories. Doggedly likeable and unashamedly himself, the Pennsylvania native has a ‘no-bullshit’ kind of charm, earning praise from the likes of Rolling Stone, Billboard and CMT, along with some of country music’s greatest heroes. “This kid,” Garth Brooks said of Gallagher, “as soon as he opens his mouth — you believe him.” In 2016 , Josh Gallagher forced the world to rear its head on season 11 of NBC’s The Voice, making history as the first country artist coach Adam Levine has ever led to the show’s finale. Since then, Josh Gallagher has proven he can hold his own on stage with Randy Houser, Eric Paslay, Lee Ann Womack, Cole Swindell and more. Gallagher’s video How ‘Bout You held the #1 spot on CMT’s 12-Pack Countdown for 5 consecutive weeks, where he was also spotlighted as a rising star through the network’s Artist Discovery initiative. In a genre with blurred lines and pandering hits running on borrowed time, Josh Gallagher has established his own distinct voice, showing no sign of fading away quietly. Following the May 2019 release of his debut project Josh Gallagher EP, JG brought the country music community to its knees with the fall single and music video Boots Like Mine. The Boots Like Mine video ultimately led to Gallagher breaking his own record, spending 8 weeks at #1 on CMT Music’s 12-Pack Countdown. Following the enormous success of Boots Like Mine, Josh Gallagher proudly announced the March 27, 2020 release of his sophomore EP Turn Around Town.
visit www.JGmusic.net
JoshGallagher TurnAroundTown